Skip to content
Trish Pictures, Trish's Posts June 19, 2010June 19, 2010 3 Minutes
So, I sat down with the kids the day after school let out for the summer and proposed a different kind of schedule for our summer at home…a schedule that included daily projects that are more involved than the normal household chores.   A shift not so much to instill a greater level of discipline and responsibility in the kids but more because I REALLY need their help!!!  Of course, my grand plan was met with the requisite chorus of groans and “but Mom!” but everyone rose to the occasion and we accomplished quite a bit this week.  It all started with a team effort to dig up a big stump and clear away a bunch of rocks in the front.  The garbage collectors arrived to pick up our trash as the kids worked and one of them yelled out “You’re working as hard as we are!  Summer should be all about playing”  (Thanks Garbage Man!) to which Wilson replied,  “Well, we’re trying to balance it out a bit this summer.” (Well put Wil!)
As the week progressed, we  included Rudy in the projects as much as possible…he makes a great supervisor!  Shamefully, the family car hadn’t been washed in I don’t know how many weeks so washing the Sienna inside and out became one of the projects…I gave the kids the bin of car wash supplies and let them have at it!  It was amazing…I came back a while later and it was all done AND done well! 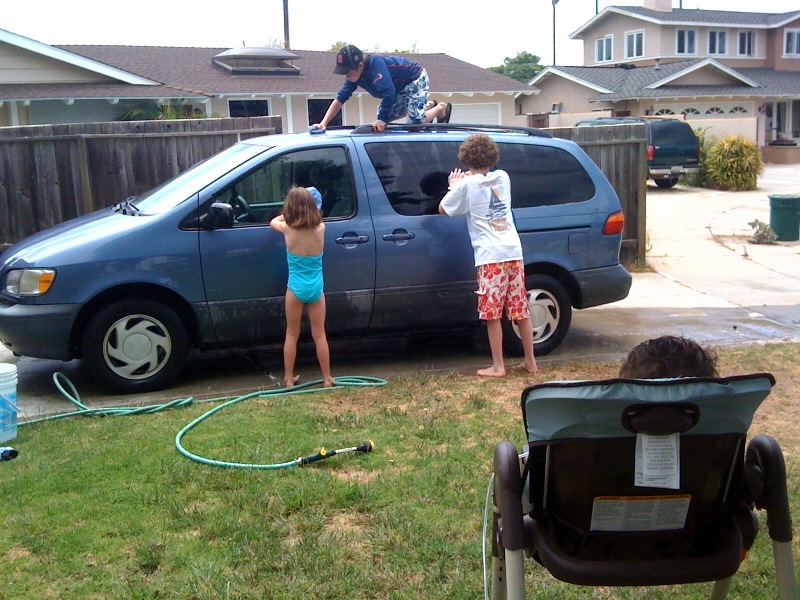 Rudy supervising the “chore” of the day!

Rudy continued his progress this week…for a little over a month, he has been rolling over from his tummy to his back and becoming quite the expert at it.  He hasn’t, however, rolled from his back onto his tummy (not much motivation there, I guess) but he has been sleeping on his extreme side more and more.  As he fell asleep earlier this week, he ended up making that final rotation onto his stomach and slept comfortably for 30 minutes until we transitioned him to his crib!  Out of curiosity, Rolf checked his oxygen sats while he was asleep on his stomach and we were SHOCKED to see it register in the 90s!!!  Something we’ve not seen before…’not quite sure what it means but we claimed it as a good sign!

The project I’m most excited is now crossed off the to do list is the reorganization of Max’s room to accommodate Rudy when he’s ready to move in.  Max and I literally pulled EVERYTHING out of his room, purged a bunch of old toys, did a little painting, washed down all the walls, Rolf assembled the new bunk bed unit and we got everything moved back in on Friday(phew!).  Of course, a major overhaul like this unearths all kinds of treasures that get rediscovered and provide hours of entertainment!  Max’s Jack Sparrow hat was one of the treasures that ended up on Rudy but he didn’t seem to mind…

I treasured alot this week in the midst of the mundane acts of home management…especially watching the kids organize themselves and work together as a team, all the creative fun and Rudy’s smile as he watched and took it all in!  Happy Weekend Everybody!

View all posts by Trish