After 3 full months of unusually hot temps and humidity here in Santa Barbara, the summer heatwave of 2015 has finally broke and we’re enjoying the beautiful weather we’re known for in our little corner of paradise.  There’s actually a chill in the air this evening and it’s a relief to finally move on to a new, cooler season…just in time for some traditional fall activities:

Fall often includes Rudy’s annual IEP meeting as well.  Each year the many different folks who play a vital part in Rudy’s developmental and educational progress come together to discuss specific goals and action steps to meet those goals in what is called an Individual Education Plan (IEP).  IEP meetings can be long and mind-boggling with the amount of detailed information that is communicated and opened to a group discussion but I’m so grateful for the investment of time that goes into these meetings.  I’m grateful Rudy’s team is willing to take the time necessary to insure we’re all on the same page and that there is continuity in his care in general.  Rolf and I are humbled by the number of gifted individuals it takes to not only educate Rudy but also make it possible for him to even attend school.  (For example, we discovered this month that there was a change in Rudy’s enteral supply provider and it took a couple of weeks to get the prescribed Pediasure Rudy is usually fed.  While we waited for delivery from the new provider, we ran out of feeds and so we headed to Costco to get the Pediasure they sell…not exactly the same formula but we figured it was close enough.  Little did we know what we were in for!  Poor Rudy ended up with a crazy, severe case of diarrhea that we couldn’t get under control…even with the GI doc recommendations!  If it weren’t for Nurse Sara and her willingness to deal with the blow outs that occurred at school, we wouldn’t have been able to send Rudy to school for two whole weeks!   A relatively simple dilemma but with some pretty serious consequences without the extra support Rudy receives.)  Rudy didn’t meet all of his developmental and academic goals from last year but he made progress in most areas and we remain grateful for progress of any kind!  Slow but steady is good…we’ll take that any day!  🙂

The past couple of weeks have been full with some pretty cool highs and some heartbreaking lows for dear friends near and far…such a vivid reminder that life is a constant mix of joy and pain.

Here are some of the highs:

Rudy is doing great in the midst of it all and we’ve appreciated a nice respite from his long list of dr. appts this month.  His quarterly check-ups with all his specialists start up again in November so we have quite a few appointments coming up before the end of the year.  I confirmed Rudy’s next trip to the pediatric dental clinic and heart transplant clinic (both at UCLA) and they fall on the same week in December…too bad I couldn’t get them scheduled on the same day.  🙂

Just two days after celebrating Rudy’s 7th birthday, we were blessed to celebrate the work of the Santa Barbara Rescue Mission at the annual Bayou fundraiser…this year we partied like it was 1950 and all on the organizing committee agree it was the best one yet.  It was a truly inspiring afternoon and made me so proud of Rolf and his team!  🙂

We’ve had a rare two weekends in a row down in L.A. for a variety of reasons and our trip last weekend included a last minute visit to Azusa to see Wilson.  What a treat it was to give him a hug and catch up a bit face to face.  He’s doing really well…he loves being at APU, is making a whole host of new friends and likes his classes.  He is challenged by ROTC in many ways but really loves it.  Rolf and I look forward to our weekly Sunday phone calls with Wilson and his updates are mostly filled with ROTC stories.  🙂  As you can imagine, he is making quite a name for himself.  A couple of weeks ago, his squad had a grueling try out for the Ranger Challenge team.  During the long run dressed in full fatigues, boots and weighted back pack, Wilson started to sing to himself to focus his mind on something other than the pain.  When he stopped, his team mate ahead of him told him to keep singing…so he did and he sang all the Johnny Cash and Zack Brown Band songs he knew by heart.  Before he knew it, his commander at the end of the line asked who was singing.  Thinking he was in trouble, he owned it right away and apologized to which the commander said “Keep singing…louder!”.  Ha Ha  I’ve nicknamed him the Singing Soldier.  I pray he finds great favor at every turn in his ROTC experience…so far it seems he is.  (P.S. He made the Ranger Challenge Team)

Rudy attended his very first GVJH cross country meet this past week to watch Olivia compete.  We went to cheer on the Mariners having no idea where Olivia would rank within the pack.  We were shocked to see her shoot out to lead at the start and keep her lead for most of the race.  She and her teammate (also named Olivia) led the pack and ran head to head for a thrilling finish with our Olivia winning by one step.  It was so much fun to watch her and it took me back to the hundreds of races I went to to watch my dad compete…I saw alot of G’pa Dick in Olivia’s stride.  Olivia’s coach named Rudy their official team mascot!  🙂  I think Rudy will have some more cross country meets in his near future.  Ha Ha Ha

Maxo has his first pre-season hockey tournament next weekend so we look forward to lots of hockey in the near future as well.

Here is one of the lows:

My college roommate and long time friend is losing her husband to cancer…it sucks and it breaks my heart…she sends updates and at the end of her updates she leaves the reader with a “to do” list because, as she says, fretting about their family isn’t productive.  I’m struck this evening by a couple of her “to dos” in particular:

“Shed a tear. Life has a tendency to break our hearts but somewhere along the way in America we decided to bottle up the heartbreak. Let it flow peeps. And even better, share those tears with someone close to you.

Stop doing for as much time as possible this week and simply be. The world needs more contemplation and presence…”

I agree with her.  As much as I want to run away from the things that hurt and distract myself with tasks, I’ve learned from my experience with Rudy and am reminded by Rochelle’s admonition that it’s best to embrace the pain, shed those tears and be in the moment…there is much to learn in those moments and so much beauty to behold – even in the midst of heartbreak.

Praying for comfort and peace for all my friends in need tonight. 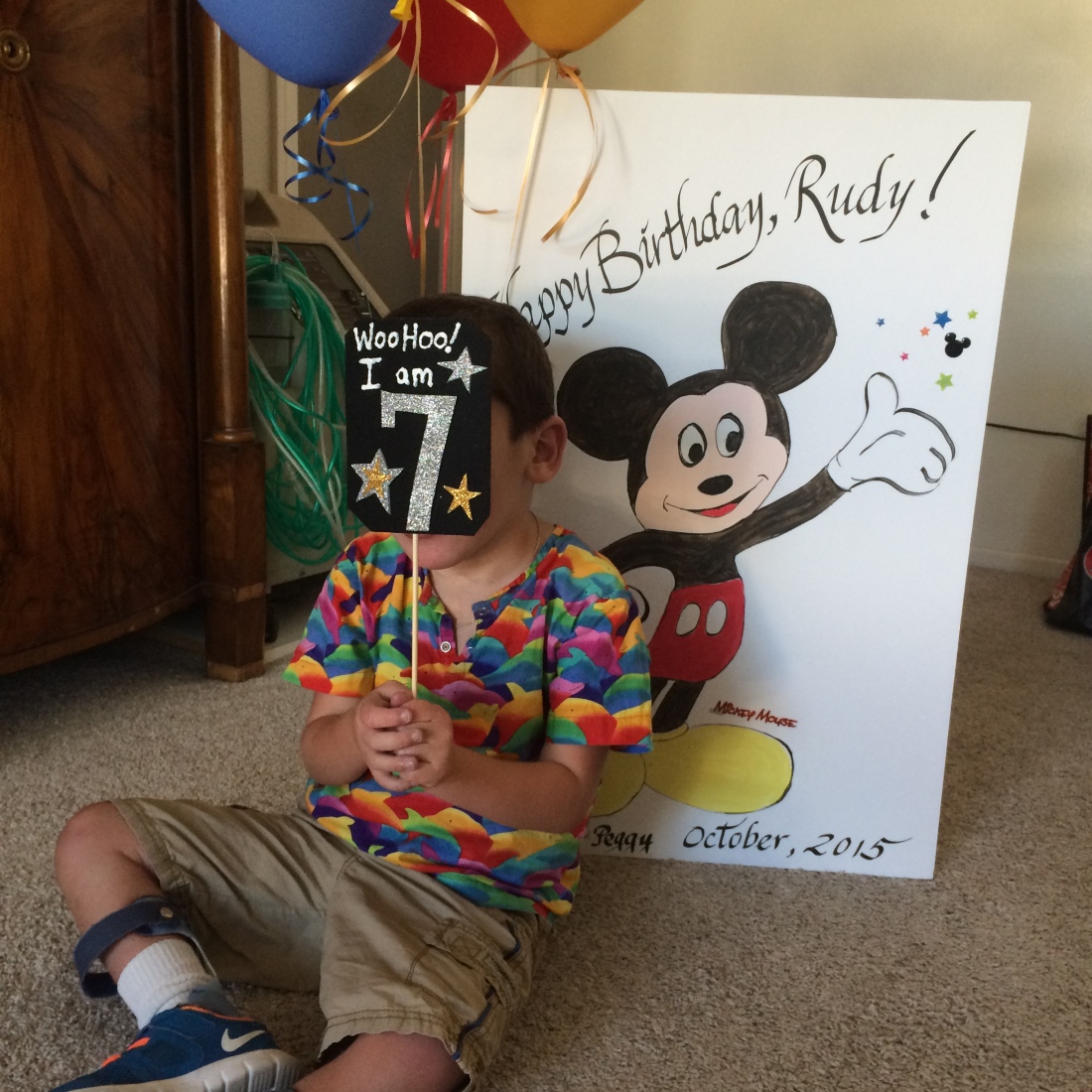 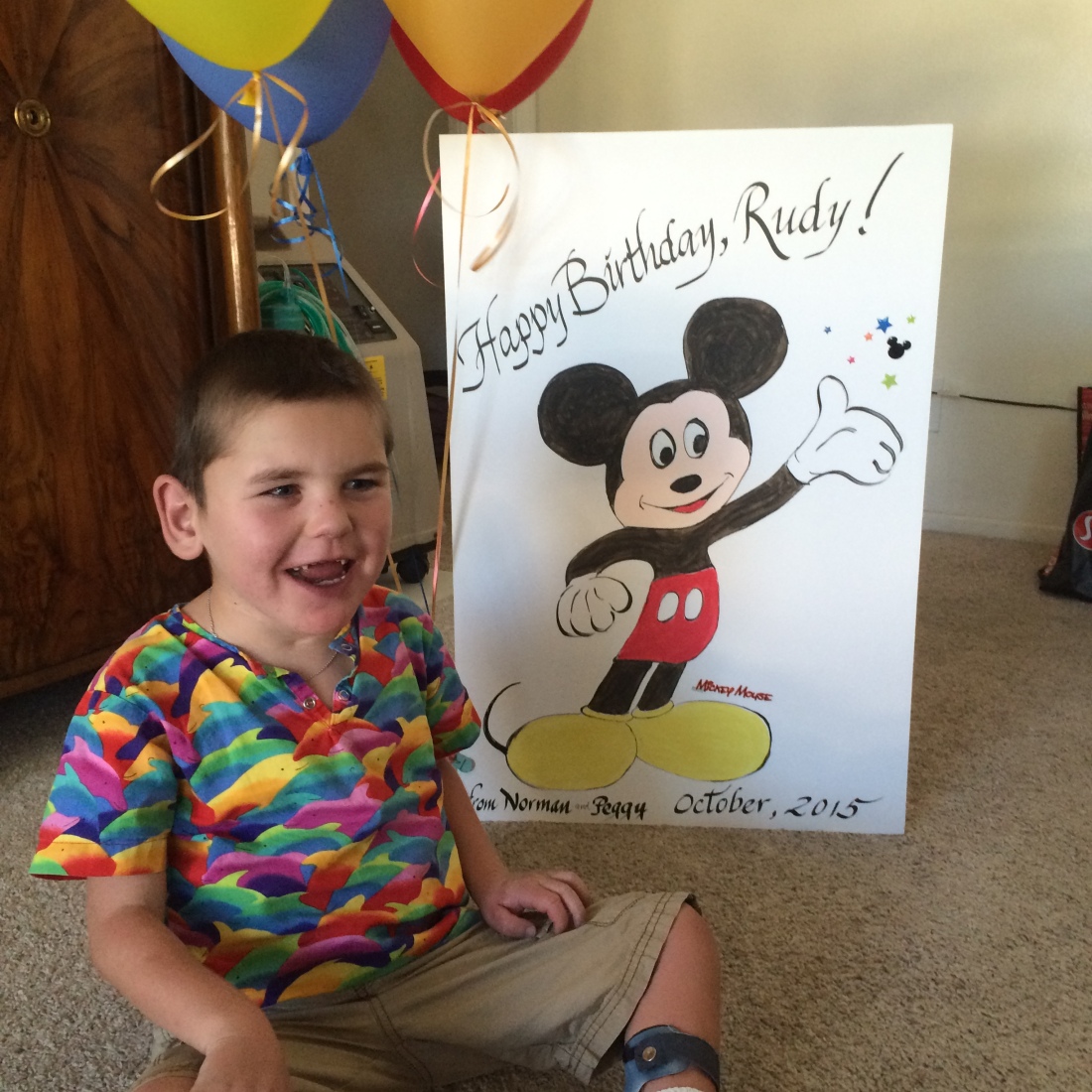 I know I say this every year but I can’t believe it’s October 1st and I really can’t believe today is Rudy’s 7th birthday.  It has been a full day for sure but full of fun!!  This year was different in that it really seemed that Rudy anticipated his birthday in the days leading up to today.  His speech therapist took advantage of it being his bday week and worked on birthday related vocabulary words and dialog during their sessions earlier in the week, our neighbor next door brought over a giant Mickey card and balloons yesterday that we used to decorate last night and Rudy helped me prepare bottles of bubbles to take in to his classmates today!  Rudy was clearly excited this morning on our way to school and he soaked up all that today held for him!  Precious!!   Thank you for all the FB messages, texts and phone calls!!  Rudy can’t help but feel loved and we are so thankful for another birthday milestone for him…something we absolutely don’t take for granted!  Happy Birthday Big Boy!!!