With Christmas just 4 days away, excitement and anticipation are building for sure!  Rudy has figured out the whole unwrapping gifts routine making it necessary for us to rewrap a few gifts already!  The gifts that arrive early and typically sit patiently under the tree until Christmas have now been stashed in the closet for safe keeping!!!  Ha Ha

The last couple of weeks have been filled with a combination of holiday festivities like the SBRM Staff Christmas Party and Auxiliary Tea, key medical appointments for Rudy and some Silver By Trish shows.  In the midst of all the seasonal and routine, we enjoyed making a new friend from Australia when we hosted Luke for a few days last week through a program at the kids’ high school.  Max and Olivia were great hosts and had fun introducing Luke to many of their friends.  Rudy was particularly happy to have a new playmate!  Ha Ha Thanks again, Luke, for being fun and spontaneous and for putting up with our brand of crazy! 🙂

Last week also included a bittersweet goodbye to an old friend when Rudy’s OT celebrated her retirement from the Medical Therapy Unit!  We will certainly miss Janine but we are also very excited for her and hope to see her around town doing fun retirement things! 😉

I got to go to Rudy’s class for some more holiday fun on Friday and while I was there, Rudy showed off his new classroom desk!

Wilson is home!  Yay!!  Max, Olivia and Rudy are on winter break!  Yay!!  And we’re ready for Christmas!  Double Yay!!

Merry Christmas dear friends!!  Wherever you are in the world and whatever you have planned for this weekend, I pray it includes memory making moments with people you love and countless reminders of how very much you are loved and appreciated! 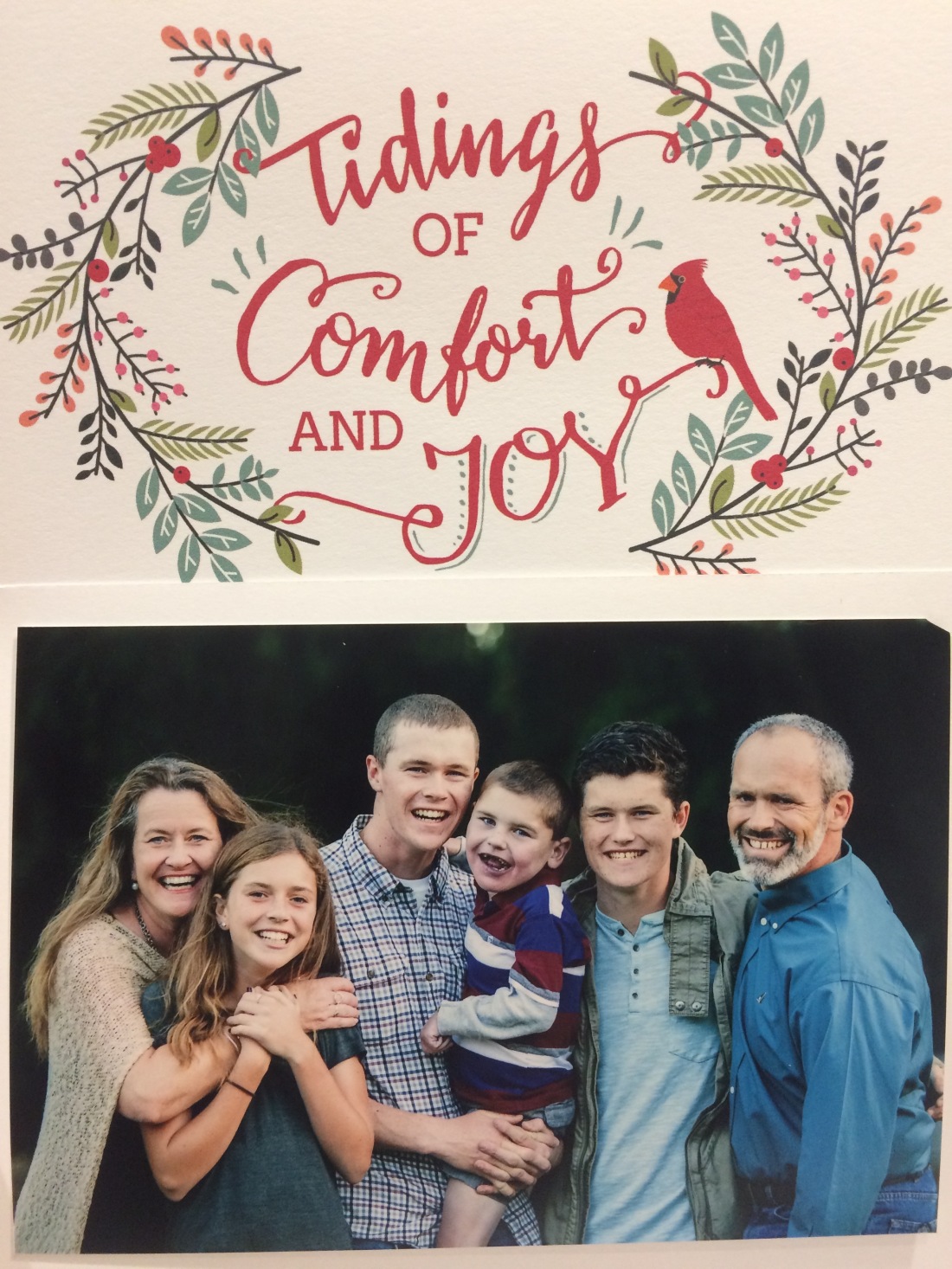 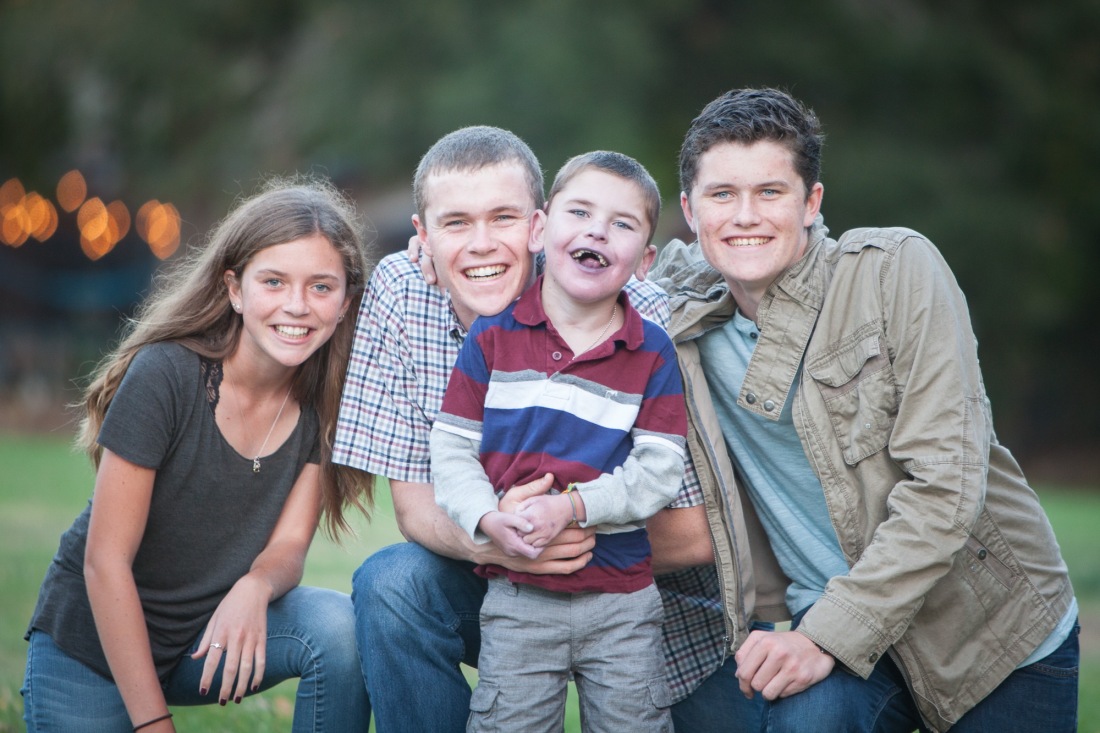 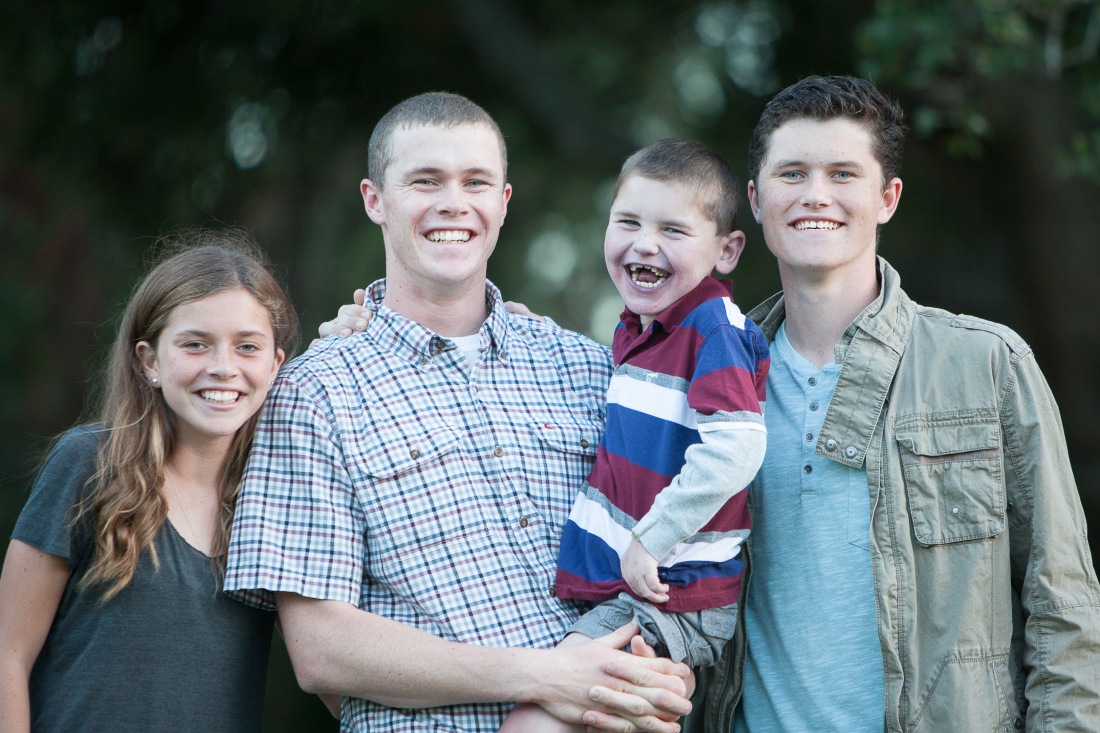 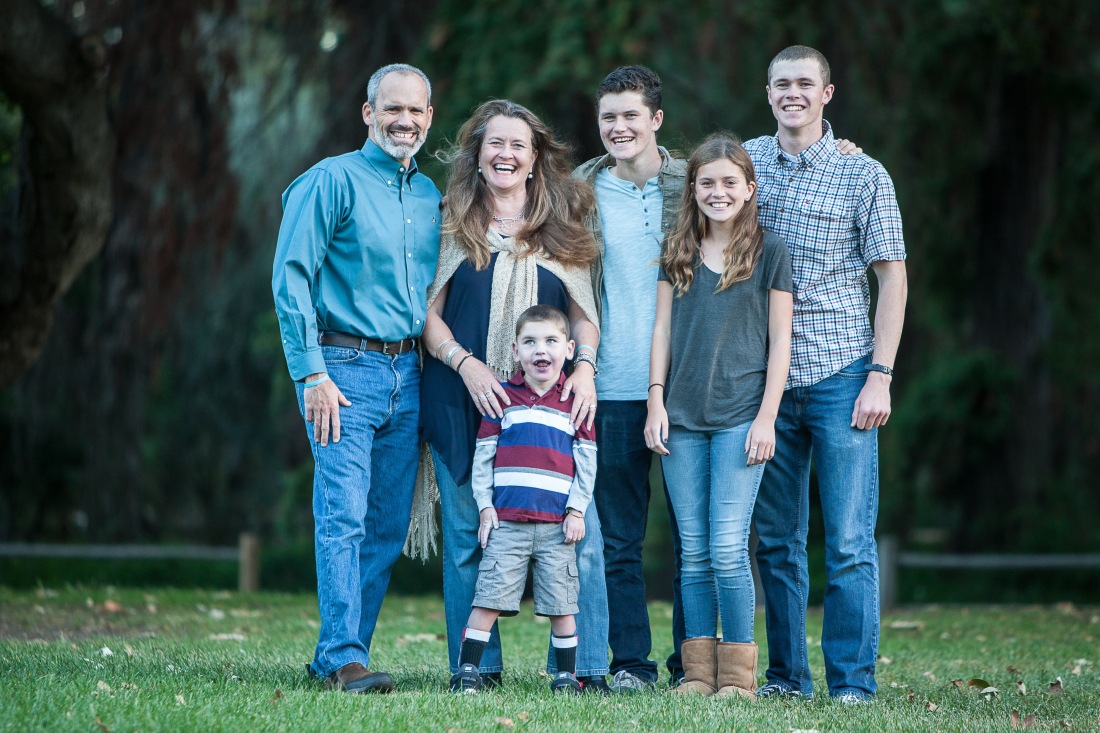 It’s officially the Christmas season and we’re enjoying all the traditional activities that accompany this time of year.  The kids have one more week of school before their winter break and we’re counting down the days!  😉  I skipped town the week after Thanksgiving to spend a couple of days with my mom in Kansas for her 85th birthday!  It was short but sweet and we made the most of our 2 1/2 day visit… 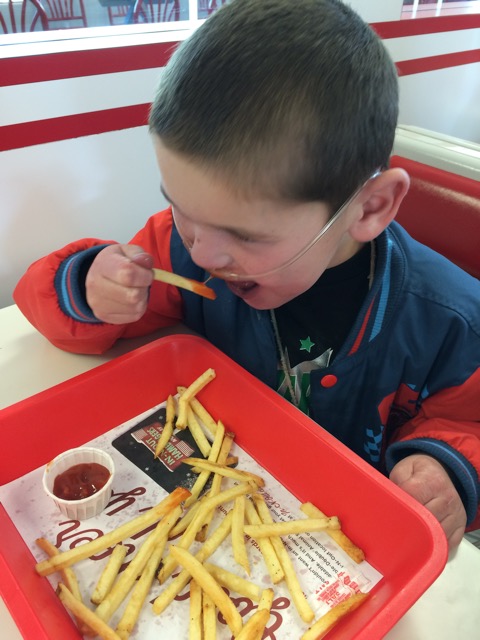 I got home from Kansas just in time for a string of Silver By Trish trunk shows and we squeezed in decorating the house as well!

Rolf, Rudy and I headed down to UCLA early Thursday morning for a visit to the heart clinic and a meeting with Rudy’s surgeon.  Rudy had an extensive echo exam and Dr. Alejos confirmed that there isn’t much change in Rudy’s heart status since his last echo.  Rudy’s tricuspid valve leakage and hematocrit level are high but his heart muscle is strong!

We had some free time between appointments so we visited the PICU on the 5th floor and enjoyed seeing some familiar faces…Roger and Dr. Kelly.  Rudy insisted on walking and he made his way around the 5th floor corridors as if he owned the place…the sight of him walking around those halls that are filled with so many memories never ceases to take our breath away and it’s always great fun to see how those who cared for him in those first several months of his life react to seeing him now. 😉

As we have described before, discussions about what to do next have come to a bit of an impasse since Rudy’s heart cath in July. The contributing doctors in conference who are unfamiliar with Rudy’s history and are just looking at the numbers, feel the Glenn is the logical next step.  Those who know Rudy’s history disagree.  Dr. Dan (cath cardiologist) encouraged us to talk with Dr. Brian Reemtsen (surgeon) directly to help us sift through all the varying opinions.

Although we have had quick consults with Dr. Brian in the hospital hallway after past caths, it has been years since we’ve had a detailed conversation with him and Rolf & I were eager to hear his thoughts on where we stand in Rudy’s treatment plan.  Dr. Reemtsen was direct in his communication with us on Thursday…although there are cardiac indicators and pulmonary progress that would typically represent the need and green light for surgical intervention, he is not recommending surgery at this time.  The main reason being that what can be done surgically wouldn’t make enough of a difference to warrant the risks…even good surgery results wouldn’t bring a marked improvement to Rudy’s life and/or heart function.  Dr. Brian believes the greatest risk to Rudy from a surgical standpoint is his issue with chylous fluid.  Chyle is a milky bodily fluid filled with free fatty acids (FFAs) that is transported through the lymphatic system.  Rudy battled the leakage of chylous fluid in his pleural cavity (chylothroax) for 8 weeks after his heart surgery in 2008 and then again in his abdomen after his stomach surgery in 2009.  During the height of his battle, Rudy lost a third of his body’s total fluid EACH DAY.  Dr. Reemtsen told us that he has never had a patient (or heard of a patient) who had chylothorax as severe as Rudy and survived.  Based on this history, the team is very concerned about the risk of chylous fluid leakage during any future surgery.

He also said that he doesn’t know of anyone who has survived as long as Rudy with no intervention!  Rudy’s current status as a post-Norwood/pre-Glenn patient is working for him and until his heart muscle function starts to deteriorate, he feels strongly that we should leave things as they are.  As he put it, he isn’t wishing we could do something but rather hoping we don’t need to do anything.

It was a bit surreal to have this serious and, at times, heart-wrenching conversation as Rudy walked circles around the office mischievously playing with the light switches and trying persistently to push every button on Dr. Brian’s computer.   In the middle of it all, Dr. Brian pointed to Rudy and said “if you had told me that he would one day walk into this office, I wouldn’t have believed it!”…particularly meaningful coming from Dr. Reemtsen who is not one to be overly dramatic or prone to exaggerate.

Although our conversation was frank and heavy, it was encouraging all in all.  It was helpful to hear a strong, definitive opinion and Rolf and I left feeling confident we’re in a good space with Rudy.  I think our perspective is slowly shifting from “anxiously waiting to do something” to “actively choosing not to do something“…a surprisingly helpful distinction.   So, for now, the plan is to continue Rudy’s palliative care with a huge emphasis on quality of life, share in Dr. Brian’s hope that we won’t need to do anything and embrace the miracle that he is.

He and his classmates also enjoyed a surprise visit from Santa (who Rudy promptly called out as special ed aide Todd!!)  Ha Ha

Rudy experienced a first at last week’s monthly blood draw…it was the first time he sat all by himself like a pro: 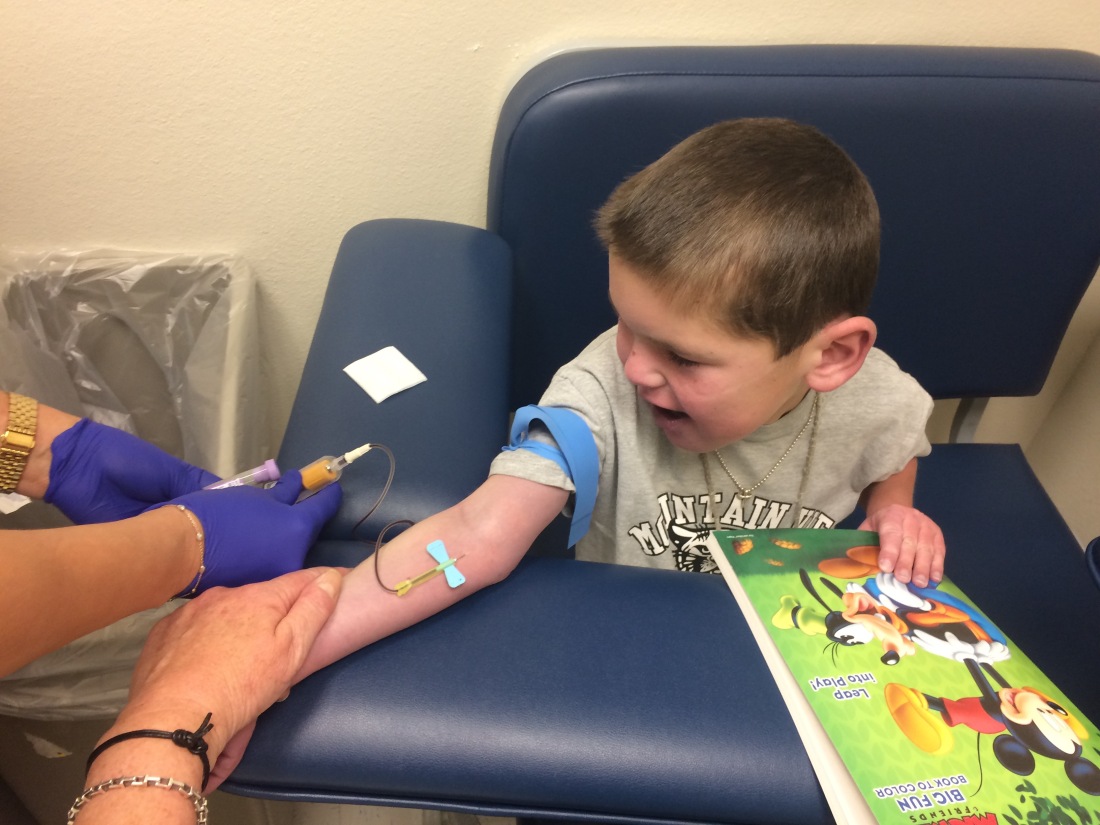 Thank you all for your prayers…since the cath especially.  I think we’ve learned a great deal in the follow-up discussions and there is no denying that God is at work in the unconventional (a.k.a. miraculous) HLHS journey Rudy is on!  Blessings to you dear friends!!