Skip to content
Rolf Pictures, Rolf's Posts December 19, 2008December 19, 2008 2 Minutes
Rudy made it back to the room at about 7:30.  He’s resting comfortably now, but looks like he went about twelve rounds–but even winning boxers come away with some pretty tough lumps.  Beyond the pain from pleurodesis and the dinged feet from the lymphangiogram, he now has a big bruise on his left side from the chest tube insertion and another on his right arm from where the team tried to deal with the pic line.  We’ve also noticed (see picture below) that he’s losing some hair, perhaps just baby hair coming off, but if anyone’s entitled to stress-related hair loss, I think Rudy qualifies.  He came back kind of chilly, so we’ve got him bundled up with a hat and socks (I chose Spiderman for our superhero) and Nurse Susan just wheeled in a heat lamp and got him tucked under one of the many gift blankets he’s received.  Been quite a week for the little guy.
In our quest to keep the positive in view there is encouragement–beyond simply being glad there aren’t any procedures for Rudy in the upcoming days.  The right side of his chest is draining very little fluid–at this point we can’t say we’re in the clear, but much better to have it this way than seeing lots of fluid.  Dr. Dan had a chance to check on the pleurodesis while he was in the cath lab and he thought things looked really good.  They did see some fluid on the left side, so Dr. Dan put in a chest tube, but it’s a very tiny one.  He only found 10cc of fluid and it appeared to have a lot more blood than chyle, so we’re hoping it’s just from yesterday’s procedure and not more chylothorax.  The lab will tell us definitively what the mix of fluid is and we’ll also watch closely to see how much drainage there is.  Throughout the procedure and now back at the room, his numbers look really good.  Dr. Dan continues to be optimistic as he sees Rudy fighting–he responds to trauma with an increased heart rate; he gets upset about things so that the team needs to take measures to calm him down.  He gets concerned when babies go through procedures and ups and downs that are part of an ICU stay and seem rather lethargic and unresponsive.  Good to have an expert confirmation of what we’re learning about our son’s character.  He’s a fighter–go, Rocky, go! 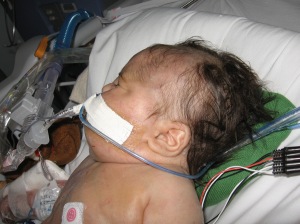