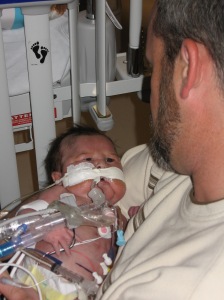 This holding Rudy thing hasn’t become old hat yet, so forgive me if I gush.  Today was the BEST.  Nurse Barbara proved to be a pro and in a matter of seconds (instead of the previous fussing with wires and tubes) had me and Rudy set up in the recliner.  While previously his heart rate would elevate during the move and it would take several minutes for things to calm down and get in range, today it was very clear that he knew where he was and liked it—never moved much from 160 bpm.  So, we didn’t get just one of those token “hold the baby long enough to take a picture” moments but about 2 ½ hours (or more importantly, almost the entire Giants-Eagles game).  The result of the game wasn’t what we wanted, but it was a proud day of introducing him to the classic discipline close friends and family refer to as “rolfing” (dozing off in the recliner and missing most of the key moments of the game).  Pure bliss.

I got up from our session to find that Rudy had leaked a good bit of chest fluid onto my shirt.  The site where the chest tube was continues to put forth fluid regularly—on the one hand this is good as it doesn’t allow it to collect on his chest and impede his breathing, but it still means that there’s a source from which the fluid is originating.  The team was content to let things trickle for a bit to see if it would subside, but there are concerns about sterility so they’ve called for a surgeon to put in a stitch.  For those who have been praying for this little issue, these next couple of days will be crucial to see if the pleural effusions come back.  We want to be done with chest tubes.

During the switch back from my lap to the bed, Barbara thought to bring in a scale to check Rudy’s weight in a few seconds unplugged from most of the gear.  After a couple of adjustments, she worked it out to 3.89 kilos (8 ½ lbs–2lbs more than at birth).  That means I haven’t been the only one in our family sitting around getting fatter over the last nine weeks.

I hate to tear myself away from Rudy now, but it’s 1pm and we are planning to have a Sunday evening together with Wilson, Max and Olivia before Trish comes back to assume duty here on Monday morning.  I’m leaving here with a great amount of peace, though.  It was so good to see Rudy and to be reminded anew of the masses of people who are with him in this journey.  There are those dedicated souls who have eyes on him around the clock, but also legions supporting him in prayer from far and wide (Rudysbeat went over 50,000 hits this weekend.)  Thanks for being a part of this.

11 thoughts on “The third time was really a charm”