It’s Friday night and Rudy & I are sitting in our quiet house, smiling at each other and enjoying  each other’s quiet company.  It’s so surreal to think it was a week ago tonight that I sat at my Dad’s side after a VERY LONG travel day to get there…although he was out due to the morphine drip and his breathing seemed labored, I was just so relieved that he was comfortable and I was there…the anxious tears I shed all day as I was in transit disappeared, my heart relaxed and I just tried to take it all in.  My mom, brothers, their wives and the Wilson cousins were all there too and we spent Dad’s last night celebrating my folks’ 54th wedding anniversary (which had been the day before) with cake and milk, singing, looking through his scrapbooks and chuckling over some old letters Dad wrote over a half century ago.  My brothers and I spent the night with Dad and I drifted in and out of sleep listening to his breathing…heavy but strong and steady.  We decided the next morning that Dad must have been marathoning to Jesus which made sense because he always was a distance runner.  And then it happened…that Holy Moment when life on earth crosses the threshold into life eternal…we were there, my  brothers and mom and sister-in-law, talking about our breakfast plans when his breathing became shallow and then just stopped…so peaceful.   A peaceful finish for a man who wasn’t always at peace…a man who didn’t find out he was adopted until his mother told him in a fit of anger as an adult; a man who had trouble expressing his feelings, communicating and relating which contributed to a strained marriage for many years; and a man who lived for decades with the disappointment of an unmet dream and yet I noticed a change in Dad the last 10-15 years.  In a season of life when many get even more set in their ways, Dad demonstrated humility and growth and the ability to change as he learned to communicate and share his feelings freely…he began to relax and enjoy life.  A woman from the church told me at his funeral service that when she visited Dad in the hospital early last week, they were joking around and bantering as they always did and at one point she said “How do you feel Dick?” to which he answered “Happy”.  What a gift!  I’m proud of my Dad…and not because of all his athletic accomplishments but because he was a man of quiet character, kindness, respectfulness, discipline, humor, faith and loyalty.  He worked hard, loved his family and honored his commitments…he ran a good race with all its hills and valleys and , in the end, God awarded him with grace in his journey with cancer, peace in his final months of life and happiness in the hours before death.  Oh, that I might have a finish like that too!  Thank you, Dad, for the love you shared with me, Rolf and the children; for laughing at my jokes and for affirming my life choices.  I’m going to miss your big smile and strong hugs, the pinochle challenges and the stops at Dunkin’ Donuts but the greatest gift you gave me was your example!  How grateful I am to God for you! 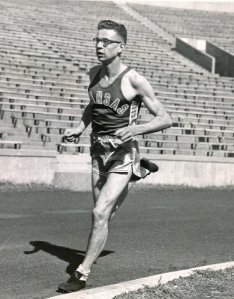 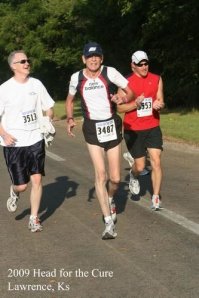 After the whirlwind of planning and executing Dad’s funeral service, I flew back to California early Wednesday morning in time to take Rudy to his appointment with his ENT surgeon at UCLA.  It was of great comfort to spend the day with Rolf and Rudy even if it was within the walls of the UCLA Medical Center…and we were encouraged by our consult with Dr. Shapiro.  Based on the little she could examine in her office, she thought Rudy’s airways are looking healthy…she was encouraged by his growth and color.  She’ll conduct a bronchoscopy on August 3rd which will allow her a closer look at his airways to make sure there isn’t any scar tissue and that the cartilage supporting his trachea is not compromised.  ‘Still not sure if Rudy will wean off the trach before or after his next heart surgery…waiting for details to unfold.

The big kids are still in Alabama and Rolf joined them yesterday for a little Geyling family reunion…they all return on Monday and life will move forward…slowly getting back to a familiar routine.  I admit that losing Dad does shake my confidence a bit as he and Rudy started their battles for survival at the same time and his fight was a source of great encouragment and inspiration to me as I’ve walked alongside Rudy.  So now we take a minute to catch our breath, regroup and focus our energy on the steps ahead…right foot, left foot, one step at a time!

14 thoughts on “Catching Our Breath”

Leave a Reply to Jane and Joe Lynch Cancel reply