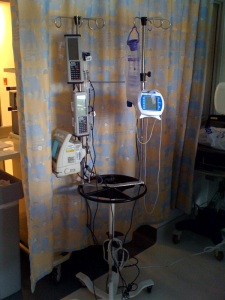 This is Rudy’s IV stand.  It is as fine a piece of equipment there could be.  Tall, stable and highly mobile.  I’ve never really pondered the IV stand.  It’s just always been there doing what it’s supposed to do.  It stood by his bedside and accompanied him on every trip for every procedure.  It once bore a lot more pumps than can be seen now–in fact it once was part of a set of as many as three that were arranged around him.  I mention it today because the astute observer will notice that there aren’t any lines that can be seen, because it’s NOT ATTACHED ANYMORE!  For the last week or so, it’s only been hooked up to deliver a few meds, but with the removal of the last pic line today there’s no way to attach it to Rudy anymore.  I think it still has to be in the room on standby, but every chance I get I push it further away from Rudy’s crib.

The team drew the final labs at noon today and after all of the counts (liver, Potassium) were what they wanted to see, the pic line was removed.  There were some strong feelings about this as it had been in around 40 days and Rudy’s had them in a lot shorter than that before they got infected.  There have been reports that our otherwise civil and measured cardiothoracic surgeon allegedly threatened to put a line in one of the fellows if it wasn’t removed by a stated deadline.  I’m guessing with it’s removal that such measures did not need to be taken, but I may just check the common points of insertion during rounds.

Rudy (and his Daddy the nurse trainee) have made good progress today.  He was switched over to room air this morning, so he’s just getting a simple mist blown to the front of his trach.  His 02 sats are looking good.  We’re trying to keep consistent with feeds–he usually takes about 20-30ccs by bottle and then we put the rest through his Gtube.  We don’t want him to mess too long with the bottle and get tired out and we also want to make sure the feeds don’t drag on too long so that there’s good space between them in order to build an appetite.  We’ll look forward to making progress on this at home because, even though we are trying to regulate the environment there are a number of distractions here in the hospital that upset the schedule.

On Monday, there will be some final discharge discussions.  Dr. Dan would like to do a discharge echo on his heart and then there needs to be some coordination on weaning his different medications.  He’s on an awful lot of drugs due to the number of issues he’s had, so there will be some thought given to what needs to be in place with him in the long term. The team will also make contact with our pediatrician and cardiologist in Santa Barbara to insure a good continuity of care.

There has been quite a buzz around the unit regarding Rudy’s progress.  Everyone is truly excited that this little warrior’s sojurn is coming to an end.  There have already been a couple of goodbyes as folks come off their shifts and there’s no denying the emotion we feel about these people who have been so dedicated to Rudy and our family.  I expect there will be a lot more feelings over the next two days.  I can’t wait until Trish gets here tomorrow morning for the last push.

But before I close, I should mention something else that has caused a buzz in the unit.  Today I perfected my Pacificier Retention System (trademark).  I can’t claim the original germ of the idea as I believe Nurse Aliza was responsible for that, but after another night of standing at Rudy’s bedside and holding the paci for him, I finally figured out a way to stabilize things without making them too tight.  I just needed to poke two more holes into the pacifier for the ear loops (which one obtains by cutting the elastics off of two hospital face shields).  Cutting a notch in the top allows ample room for the nostrils.  Dr. Lee was so impressed he grabbed supplies to take home for his newborn son.  To think, they have the equipment here to do multi-organ transplants, but nary a PRS.  Yes, six months in the ICU gives you a tremendous amount of time to think.